Yesterday’s publication of the Whyte Review is a significant milestone in the investigations into mistreatment within gymnastics.

The Review has taken into account the testimonies of over 400 individuals, and has made 17 recommendations to British Gymnastics.

You can read the BAC’s response to yesterday’s publication here.

The below timeline illustrates events up until this point, and what is still ongoing in terms of support to victims.

The Netflix documentary ‘Athlete A’ is released. The documentary tells the story of the investigation into abuse within USA Gymnastics.

The first direct contact to the BAC is made by a gymnast. During this period, a significant number of gymnasts made allegations about mistreatment within the sport, with concerns raised that British Gymnastics had failed to deal appropriately with complaints that it had received.

BAC Chair Vicki Aggar publicly calls for a ‘thoroughly independent review’ into the allegations, so that victims’ concerns can be ‘taken seriously, not brushed under the carpet’. 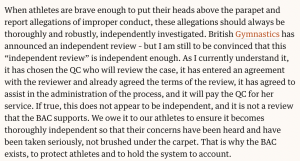 The BAC welcomes British Gymnastics’ decision to step away aside from its review into allegations, allowing UK Sport and Sport England to co-commission the independent review that the BAC had pushed for.

After being funded by UK Sport and Sport England to support those with concerns, the BAC then commissions the NSPCC to jointly deliver a dedicated helpline, which is launched on this day. 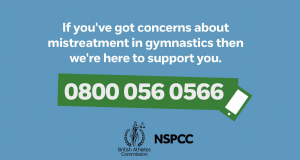 Anne Whyte is appointed as the Reviewer to lead the independent review into allegations.

The Whyte Review formally starts. It is tasked with assessing whether:

A specialist case management team is seconded to the BAC from the NSPCC, in order to provide comprehensive, end-to-end support for those who have reported concerns. A dedicated case manager is allocated to every individual, and a varied suite of support methods is enacted – including emotional, practical and specialist clinical support.

Anne Whyte confirms that the evidence gathering stage of her Review is now closed, with more than 400 people having submitted information.

In partnership with Dr Misia Gervis, the BAC helps to facilitate the first group therapy session for victims.

The BAC welcomes British Gymnastics’ announcement of an independent complaints procedure, which will investigate existing individual complaints made via the BAC.

The BAC/NSPCC helpline closes, having taken over 250 calls. Both organisations continue to support both new and existing cases. Throughout the remainder of 2021 and into 2022, the BAC’s dedicated team has continued to provide end-to-end support to those who reported concerns, with a number of measures put in place to ensure that the support is as robust and effective as possible.

UK Sport announce that the BAC will receive increased funding for the Paris Olympic and Paralympic cycle, in recognition of its recent work. This allows the BAC to bring the members of staff previously seconded from the NSPCC into the organisation on a full-time basis, strengthening the organisation’s expertise in this area, and maintaining consistency in levels of support to athletes.

The Whyte Review is published.

After this point, the organisation will continue to signpost gymnasts and their families to appropriate avenues of support, and will also continue to support those victims whose cases are still yet to be resolved by British Gymnastics’ Independent Complaints Process.

The BAC believes that the publication of the Whyte Review should mark the beginning, rather than the end, of a new chapter for sport. It is imperative that the recommendations made by Anne Whyte QC and her team are implemented with transparency and accountability, in order for participants and observers to have full confidence in the safety and integrity of sport at all levels.